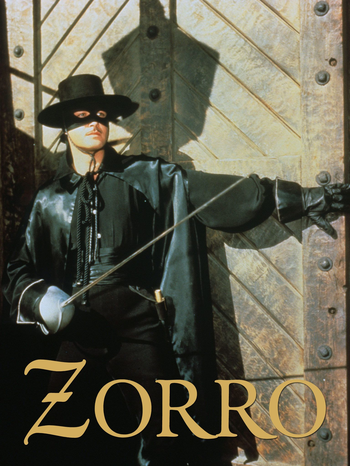 "Beware, Commander! My sword is a flame to right every wrong, so heed well my name!"
Out of the night, when the full moon is bright,
comes a horseman known as Zorro.
This bold renegade carves a Z with his blade,
a Z that stands for Zorro.
Zorro, the fox so cunning and free.
Zorro, who makes the sign of the Z.
Zorro! Zorro! Zorro! Zorro! Zorro!
— opening theme tune
Advertisement:

Zorro is a 1957-1959 Disney-produced swashbuckler television series starring Guy Williams as the eponymous character. Four feature-length TV specials were made until 1961 after the series' end.