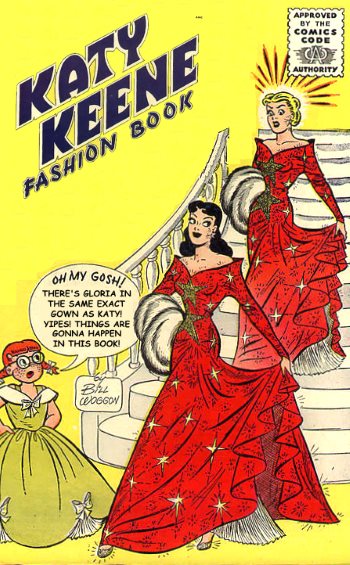 Should be the most well-dressed Cat Fight ever.
Scully: [about a female corpse] Mulder, she's wearing my outfit.
Mulder: How embarrassing!
— The X-Files, "How the Ghosts Stole Christmas"
Advertisement:

A woman buys an outfit to wear to some event, and is humiliated when she sees another woman wearing the same thing. Cue death glares and scoffing at each other.

Truth in Television, at least for some women. It doesn't matter if she bought her dress at the snooty boutique or the local Walmart (though if it is from Walmart, then both suffer the humiliation of knowing that another woman knows she got her dress from the bargain bin), wearing the same dress is undeniable proof that she's bought a mass-produced consumer item, breaking any illusion of the dance taking place in a Jane Austen novel where all the dresses have to be hand-made. She might also be self-conscious because the other woman upstages her, having a body type (taller, thinner, curvier, etc.) that better fits it or whose complexion/accessories/hairstyle/makeup better compliments it and is generally able to look better in it.

When someone is conscious about their appearance, buying clothes that look and fit juuuuust right can be a long and painstaking process. Seeing someone else in the same outfit is akin to an artist having their style copied. See Mars-and-Venus Gender Contrast, since two men in the same outfit are far more likely to laugh over it and move on (probably aided by the fact that men's fashion isn't nearly as varied; in most formal events, all men will be wearing identical tuxedos) Contrast Whole Costume Reference (in that wearing the same outfit is considered a good thing). Contrast also with Coordinated Clothes where characters intentionally wear matching clothes to show that they belong together.

Compare They Stole Our Act.