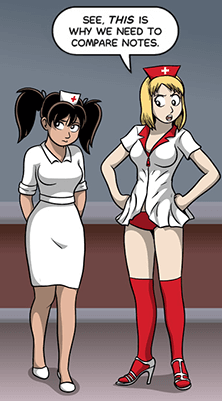 Lister: God, I went out with a lot of nurses, didn't I?
Kryten: I don't believe those are authentic uniforms, sir. Note the astonishing brevity of those hemlines. I believe all those girls are impostors, pretending to belong to the medical profession for some nefarious purpose as yet unknown.
— Red Dwarf
Advertisement:

A sexy but impractical nurse outfit that plays to an apparently widespread fetish for nurses. It is far more Stripperific than the loose-fitting scrubs nurses of either gender wear these days, and which are more like baggy pyjamas.note Although of course there's some appeal to that outfit as well. Most of the time, these costumes are worn by women who aren't nurses, but sometimes they pop up on actual nurses in material that's heavy on Fanservice or just written by someone who's apparently never seen a real nurse. Red-and-white stripes are not uncommon, referring to the outfits that gave hospital volunteers the nickname "candy stripers"; otherwise, the outfit is likely to be pure white.

Actual nurses tend to hate this trope, at least in part because they are often the target of unwanted sexual advances on a daily or near-daily basis while working a highly stressful job.

It is, however, something of a Dead Unicorn Trope in the West; in Japan, however, anime nurses are routinely underdressed. While at one point nurses did (and in some countries, still do) wear dresses or skirts as part of their uniforms, the hems were never more than an inch or two above the knee, at most. Nor did they show Absolute Cleavage. An overly-sexy outfit (besides being impractical) would have been seen as unprofessional, and would have caused them to lose credibility with patients and/or their families.

The Giant Medical Syringe tends to occur alongside this outfit in Japanese media, as a wordplay is involved: "chu" means kiss, while "chuusha" means injection.

Not to be confused with Hospital Hottie (actual sexy nurses) or The Florence Nightingale Effect (the relationship between caregiver and patient).

For prostitutes acting as nurses during wartime, see Camp Follower.