Fanfic / Sucker for a Cute Face 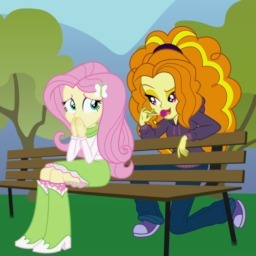 Sucker for a Cute Face

is a My Little Pony: Equestria Girls shipfic written by EyeswirltheWeirded

Quiet mornings before school starts can be lonely, but peaceful. For some people, they're a good time to just breathe and prepare themselves for the day ahead. Fluttershy and Adagio Dazzle find themselves doing this in the same place at the same time, in their own ways.

The fic is based around the Crack Ship between Fluttershy and Adagio Dazzle. Despite this, it is not a Crack Fic, instead focusing on the incredibly sweet romance between the two girls and Adagio's reformation efforts.

Sucker for a Cute Face includes examples of: