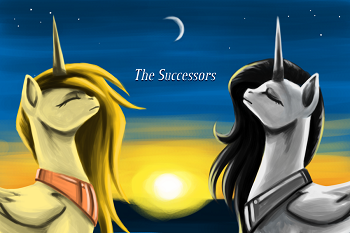 The Successors is a My Little Pony: Friendship Is Magic fanfic written by Portmeirion and based on a storyline and artwork by Valkyrie-Girl

Set one thousand years after the conclusion of the series, the story deals with the adventures of two earth pony sisters, Blue Moon and Summer Sun, who are transformed into alicorns by the Elements of Harmony and appointed to rule Equestria after the deaths of the former princesses. Renamed Aurora and Corona, respectively, the sisters are forced to adapt to their new lives quickly in order to deal with a grave new threat.

The fic is now complete and can be read here

This My Little Pony: Friendship Is Magic Fanfic contains examples of the following tropes: