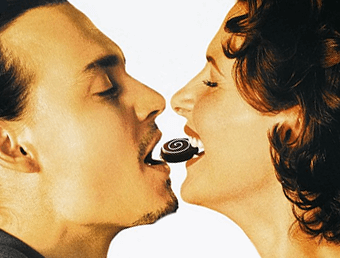 They say that the way to a man's heart is through his stomach.
Flowers say, "I'm sorry" — chocolate says, "I love you!"
— American proverb
Advertisement:

Chocolate is one of the main components of romance, relationships, and sometimes even sex (not necessarily of that kind, obviously, though it may happen). Some believe that chocolate simulates the same part of the brain that sex does, but this is an Urban Legend; still, the two combine well.

Chocolate is used, primarily, within these three contexts:

Though becoming far less common in Western countries, in countries like Japan it remains highly popular and important (see the Real Life section), which also justifies the fact that it's common in romantic settings present in Japanese media. In the case of Western media, it's more prevalent in period pieces or in movies made before The '60s and The '70s.

They're usually seen as either part of or on its own as a Grand Romantic Gesture. It is also often paired with some Flowers of Romance.