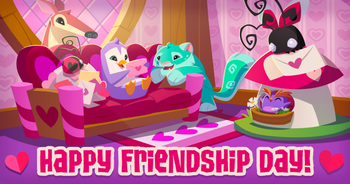 It's not Valentine's Day, it's Friendship Day!
"You are my very best friend. When I see you, I'll say, 'happy Valentine's Day'."
— Elmo Monster and Abby Cadabby, Sesame Street
Advertisement:

Valentine's Day is a day devoted to love. While this can include platonic love, the focus is generally more on romantic love, especially these days. However, this trope is for when a character makes a Valentine for their platonic friend.

There are several reasons why a character might do this: maybe they go to a school where the teacher makes them write Valentines for the whole class so no one feels left out (common in American elementary schools). Maybe they're single but don't want to miss out on the fun. Maybe they just want to express some platonic affection. In Japanese culture, aside from giving Chocolate of Romance on Valentine's Day, they're also known for giving "friend chocolates" and "obligation chocolates" (aka "giri-choco").

When Played for Drama it can indicate that the character is lonely because of their nonexistent love life, but sometimes it's played in a more positive way by showing how strong the characters' friendship is or for An Aesop about how friendship is just as, if not more, important than romance. These two messages may be blended together for the bittersweet message: "I may be disappointed that I don't have a boyfriend/girlfriend, but at least I have great friends." Another reason for enforcing this trope is for when, usually in kids' media, they want to have a plot about Valentine's Day, but there is no romance on the show.

Sometimes this can lead to the two friends falling for each other, but very often they remain platonic friends, and sometimes there is no question of them falling for each other (one's already in a relationship, they're related, the recipient is the sender's teacher/mentor, etc). If the characters are related, it might be used to show how deep their familial bond is.

Often happens in a Valentine's Day Episode, see also Platonic Kissing and Platonic Declaration of Love. May be done by Platonic Life-Partners (especially if they're Like Brother and Sister) or Heterosexual Life-Partners.