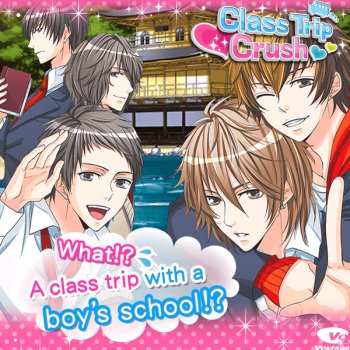 Class Trip Crush is a Romance Game Visual Novel from Voltage, Inc. for iOS and Android devices. In it, the player takes the role of a teenager attending an all-girls high school. Her class is just about to embark on the traditional class trip when their school faculty makes an announcement: going forward, all school functions will be held with the neighboring all-boys school. Beginning with the class trip.

The protagonist and her two best friends thus unexpectedly find themselves grouped up with five boys for the duration of the five-day trip - most of whom seem pretty pleased by the prospect and interested in getting to know the girls while they have the chance. It's up to the player which one of them the protagonist decides to spend her time with - the soccer star, the baseball star, the flirt, the bookworm, or even a genuine celebrity.