Visual Novel / 10 Days with My Devil 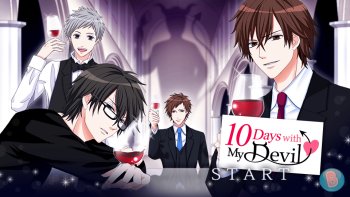 Don't blame us. We devils are here to take your soul.
Devils are not allowed to fall in love with humans.
If a devil saves a human, he'll cease to exist.
Advertisement:

10 Days with My Devil is a Romance Game Visual Novel by Voltage, Inc. for iOS and Android devices. In it, the player takes the role of a young woman who, due to an unexpected mishap, misses her fated death, and discovers in the process that she has become a loose end for the demons whose job it is to collect the souls of the dead for rebirth.

Desperate for a little more time to take care of some last important business, the protagonist bargains with the five demons who were handling her case for just ten more days. Although it means breaking the laws of demonkind, they agree - on the condition that she allow one of them to monitor her closely, both to ensure that no other demons learn about the exception and to make sure she doesn't try anything foolish.

Demons aren't allowed to fall in love with humans, lest they start trying to interfere with their fates. But a lot can happen in just ten days.

A Westernized localization of the game has also been released by Voltage's American subsidiary under the title My Killer Romance.