Manga / I Think Our Son Is Gay 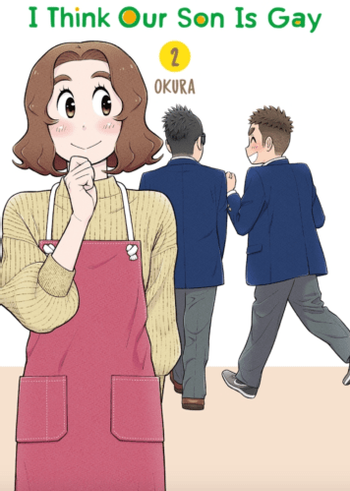 I Think Our Son Is Gay (Uchi no Musuko wa Tabun Gay) is a comedy Slice of Life manga by Okura about a Japanese family whose eldest son is probably gay.

It's mainly told from the point of view of the open-minded mom Tomoko, but the focus is on the eldest son Hiroki and his (terrible) attempts at hiding his sexuality. The family also includes the younger brother Yuri, who's quiet but notices more than he lets on; and the father Akiyoshi, who tries to do as much quality parenting as he can when he's not away on business.

The manga began its run in Gangan Pixiv in 2019. Square Enix Manga & Books announced that they will be publishing the manga in English in May 2021.

Compare to the author's previous work, That Blue Sky Feeling, about several teens exploring their orientations.