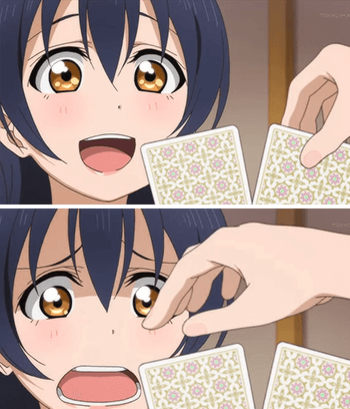 Poker isn't just a game of cards, it's a game of wits.
Advertisement:

This venerable past-time, played by everyone from lowlife Old West thugs to debonair millionaires, is founded on the ability to read faces and prevent your own from being read. To scrutinize the slightest nuance in others' words, eyes, affects. To exercise absolute control over every muscle spasm, eye twitch, and verbal tic. To keep your head under pressure, calculate the odds on the fly, and control your emotions with an iron fist.

And then, there are these characters.

These people couldn't hold a poker face if their life depended on it. Every emotion on their faces is broadcast for all to see, which makes for a very short and easy game of cards.

Due to the popularity of Ranma ½, this trope has become a Stock Shout-Out in Japan. When playing Old Maid, or a similar game where players take cards directly from others, the character with no poker face will fluctuate wildly between anguished cold sweat and an enormous shit-eating grin depending on which card the other player is about to grab. Often this results in a fake-out, where the other player pretends to take the bad card and gives the hapless fool a brief moment of elation, only to pluck the good card at the last moment. Cue wailing from the loser.