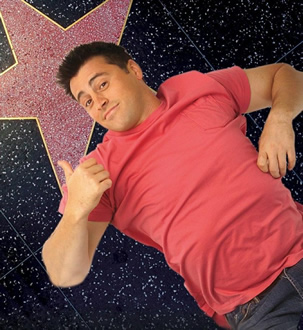 Go west, young man.
"On Friends, Joey was a womanizer, but we enjoyed his exploits. He was a solid friend, a guy you knew you could count on. Joey was deconstructed to be a guy who couldn't get a job, couldn't ask a girl out. He became a pathetic, mopey character. I felt he was moving in the wrong direction, but I was not heard."
—Kevin S. Bright, executive producer of the show.
Advertisement:

Joey was a Spin-Off of the wildly popular sitcom Friends. It transplanted wannabe actor Joey Tribbiani (Matt LeBlanc) to Los Angeles, where he tried to make a go of becoming a big star. It added new characters such as Gina, his equally promiscuous sister, played by Drea de Matteo of The Sopranos; Michael, his sheltered nephew, played by Paulo Costanzo, and their neighbor Alex, played by Andrea Anders. Plots usually revolved around one of three things:

Some people were apprehensive about this spin-off as they were unsure of whether Joey would be able to stand on his own as a character and support his own show. The first episode drew in fairly impressive ratings (18 million viewers) and the show was successful enough to get a second season. Though in the second season NBC put it up against American Idol among other things, causing its ratings to drop which was the final nail in the coffin. In the middle of the second season, Joey was no more, at least in the US, the remaining episodes did air overseas and were eventually released on DVD... in Canada. A total of 46 episodes were released, from September, 2004 to May, 2006.

Not to be confused with the other kind of joey (a newborn marsupial) — as Joey himself once did — or with a 1997 film about that kind of joey.