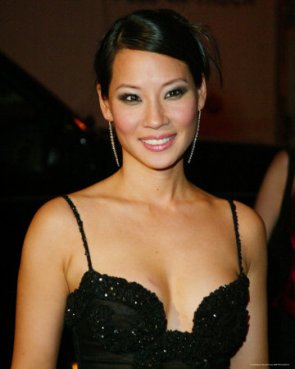 "You respect all of these people that you know in the business as actors. And they sort of turn around and say, we really like your work. It's a nice acknowledgment."
Advertisement:

She was born in Queens, New York City, to Chinese-born Taiwanese immigrant parents. Although she did well in her studies, she started acting when she auditioned for a minor role in a college production of Alice in Wonderland, and instead won the lead. After some small roles in films and television, her breakthrough came when she got a part in Ally McBeal, playing the foul-mouthed Ling Woo, a new character specifically written for her. Her tough attitude made her a sex symbol for a lot of viewers, and her performance earned her Emmy and Screen Actors Guild award nominations.

Since then, she has appeared in a variety of film and television roles, often playing an Action Girl or Dark Action Girl, as well as doing voice-acting in animation (cf. her appearance on the Futurama episode where Fry downloads Lucy Liu's likeness into a robot and uses it as his girlfriend and her role on the King of the Hill episode "Bad Girls, Bad Girls, Whatcha Gonna Do?" as Connie's delinquent cousin Tid Pao who tricks Bobby into making a meth lab for her). Liu also holds the honor of being the first Asian-American woman to host Saturday Night Live (her episode was a season 26 Christmas episode with Jay-Z as a musical guest). In the 2010s, she completely changed her image and finally broke away from Dragon Lady and Ms. Fanservice typecasting by playing Dr. Joan Watson opposite Jonny Lee Miller's Sherlock Holmes in Elementary.

Liu is bilingual in English and Mandarin, and holds a Bachelor's degree in Asian Languages and Cultures from the University of Michigan.