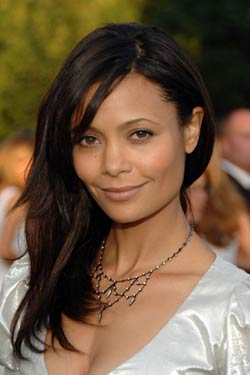 She's best known for such movies as The Chronicles of Riddick, The Truth About Charlie, 2012, Mission: Impossible II and Rock N Rolla. She's plays as Maeve in the HBO series Westworld.

Newton married English director Ol Parker in 1998. They have three children together, daughters Ripley and Nico along with a son, Booker Jombe, all of them delivered in home births. Since then Nico began acting herself in 2019 with the live action film of Dumbo. They appeared together later in the 2021 film Reminiscence (the pair also have a very strong family resemblance, with many fans and news media calling Nico her "Mini-Me").

Initially she modified her name's spelling (Thandiwe means "beloved" in Shona, the African language of her mother's ethnic group), but restored the original from April 2021.

Not to be confused with Zoe Saldaña.