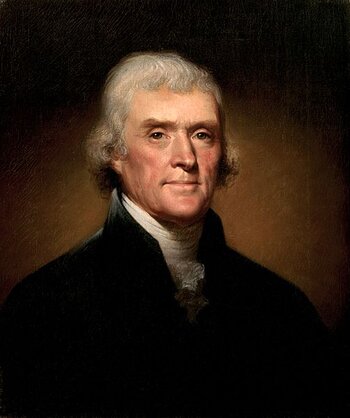 "The tree of liberty must be refreshed from time to time with the blood of patriots and tyrants."note He goes on to say, "It is its natural manure." Practical fellow…
"A little rebellion every now and then is a good thing."
—Thomas Jefferson
Advertisement:

Thomas Jefferson (April 13, 1743 – July 4, 1826) was a Founding Father and the third President of the United States (1801–09), immediately succeeding John Adams and preceding James Madison. He is best known for being the primary author of the Declaration of Independence, written in 1776. The first President from the Democratic-Republican Party, Jefferson previously had a prominent career in politics, serving as George Washington's Secretary of State and John Adams' Vice President. A highly intelligent man skilled in many subjects, his other areas of expertise included theology, history, music, architecture, and earth sciences.

Jefferson was the intellectual visionary of the Revolution, the author of the Declaration of Independence, and also a staunch critic of Christianity and upholder of the separation of Church and State. He has been tough for some historians to get a handle on, in how he claimed that "All Men Are Created Equal" and opposed slavery while also possessing hundreds of slaves, among other seemingly contradictory aspects of his life. This became even more complicated in the light of the validation of the long-denied rumor of his affair with Sally Hemings via a DNA test, accepted by a sizable consensus of American historians with a dissenting minority. Sally Hemings was a half-sister of his late wife, the daughter of a black slave and a Virginia landholder. Jefferson began a relationship with Sally and fathered several children with her, all of whom were born slaves. Several died in infancy and bondage, while those who lived were freed during Jefferson's life or upon his death. Sally however, was freed instead by Jefferson's daughter Martha after 'doing her time'.

Despite his contradictions, Thomas Jefferson is one of the most important men in American history, whose legacy endures even today for a variety of reasons. He made major antislavery moves like abolishing importation of slaves into America, which was done at the same time as England's abolition and the enforcement of the West Africa Squadron. This ended the international slave trade from Africa, but internal slavery within America continued until Abraham Lincoln abolished it. Jefferson also oversaw the acquisition of the Louisiana Territory into the United States and doubled America's territory overnight, albeit because Napoléon Bonaparte offered it at such a bargain that no US President would have turned it down.

As a politician, he promoted democracy for the common man. Jefferson was highly skeptical of contemporary aristocrats and corporations, and he criticized the rule of the wealthiest classes and plutocracy numerous times, often including slavery as a great sin of the upper classes (his political rivals of the time would often accuse him of hypocrisy). He also supported the social goals of the The French Revolution, in contrast to his rival Alexander Hamilton. Jefferson's criticism of Christianity and promotion of Deism made him a consistent voice for the separation of Church and State among Americans, and indeed he would be denounced by contemporaries like Hamilton for this, but also cited by later religious freedom advocates like Christopher Hitchens as a role model. Jefferson's time as Adams vice-president contained instances of acting against him but the two reconciled in later life (coincidentally dying on the same day, with the last words of each man being about the other). His writings are still of great value, and today defenders see his personal contradictions as evidence of a personality who was far more complex than previously believed. The man, as one of his latter day admirers said, contained multitudes. He was also responsible for founding the University of Virginia, which later became Edgar Allan Poe's alma mater.

Jefferson was quite the polymath: he spoke six different languages, held America's first archaeological dig, designed a new kind of plow, and served as President of the American Philosophical Society, which promoted many new scientific advancements during the period. He was also the inventor of two great features of modern America: the swivel chair

(the kind you're probably sitting on, or sit on at work) and macaroni and cheese

(the baked kind). If you're presently eating macaroni and cheese while sitting on a swivel chair, know that you owe your present condition to Jefferson.

It is without question that Jefferson was one of the most influential figures in American history. He created the political party which would later become today's Democratic Party, and his writings were very important to numerous later American political figures like Abraham Lincoln, who saw Jefferson's ideas as being "the definitions and axioms of a free society".

"So what'd I miss?"
Feedback