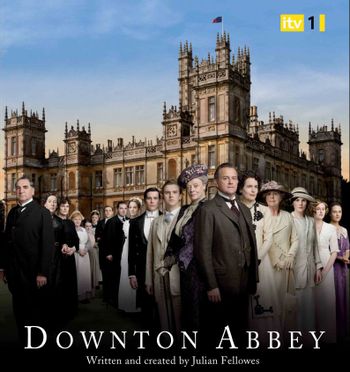 Set in an Edwardian country house from 1912—1925, Downton Abbey (2010—2015) created and primarily written by Julian Fellowes portrays the lives of the aristocratic Crawley family and the servants who work for them. Robert Crawley, the Earl of Grantham, has three daughters but no sons. Since (as with most British peerages) the Grantham title must pass to an "heir male of the body" (i.e. a male-line blood descendant of the 1st Earl), Crawley's cousin James and James's son Patrick are the heirs presumptive. Then both James and Patrick die in the sinking of the Titanic. So what will become of the Earl's fortune (of which the lion's share comes from his American wife's family)? This Succession Crisis drives the initial plot of the show, but soon enough, a host of intersecting plotlines occur. The Ensemble Cast faces a variety of personal struggles, and everyone has to deal with the gradual modernization of Britain.

Much like the earlier series Upstairs Downstairs, the drama follows both the aristocratic family who own the house and the large staff of servants who make it tick. The second series dealt with the effects of World War I on the entire household.

The show is named after the large building where the family lives. It is not called Downtown Abbey. The show ran for 6 series

, concluding on Christmas Day 2015. Four years later, a movie was announced for a September 2019, release date. Tropes for the film should go here. A sequel, Downton Abbey: A New Era, was released in 2022 and its tropes should go on its page.

PBS had the broadcast rights from 2010 until they lost the rights in June 2020; it was shown as a flagship of their Masterpiece Classic lineup during the winter months from 2011 to 2016, after which the series moved to the Sunday evening prime access slot for a few years afterwards. Marathons were broadcast in August 2016 and June 2020. Ultimately, the show's popularity, and accompanying intense viewer support, ensured not even a year would pass before PBS reacquired the rights for an additional two years, beginning in February 2021; reruns resumed in syndicationnote or, as PBS itself likes to put it, "check your local listings" during Festival '21 the next month.

Many spoilers are unmarked in the trope list below.

Example of:
The Edwardian Era