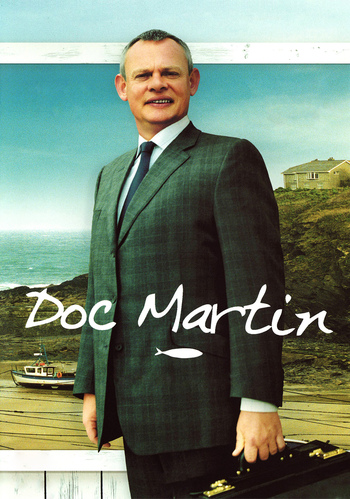 A mix of Medical Drama and Brit Com, brought to you by ITV starring Martin Clunes. The character is based on the character Doctor Martin Bamford from the 2000 Comedy film Saving Grace and the two BSkyB TV movies “Doc Martin: The Movie” and “Doc Martin and the Legend of the Cloutie”, before being significantly retconned and renamed "Ellingham" by Dominic Minghella (spot the anagram). Aside from the scenic postcode, there is no link between the two characters.

Dr. Martin Ellingham is a highly-skilled Doctor with two fairly glaring characteristics. Firstly, he's a misanthrope with the bedside manner of Hannibal Lecter. Secondly, he's managed to acquire a fear of blood. The latter resulted in him leaving his job as a renowned surgeon in London and heading for the Cornish village of Portwenn to become their GP (General Practitioner, i.e. village doctor).

There he deals with the variety of local oddballs who often ignore his medical advice, the ailment of the week, being a magnet for the local dogs, his aunt(s), and the argumentative local schoolmistress.

The show has aired a total of nine series. In 2020 Saving Grace director Nigel Cole confirmed that the tenth series would be the last - it is expected to air in 2022.

This comedy-drama contains examples of the following: