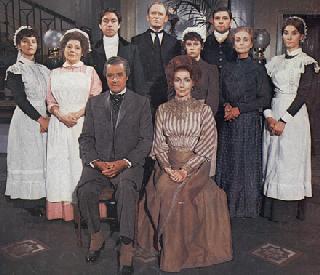 Hazel Bellamy: There are two families living in this house. There's us, the Bellamys, and there's the family downstairs. With father Hudson, mother Bridges, and their son Edward—who's in the army now, and so proud of him we are. There's the eldest daughter Rose, who lost her young man at the front. And the two youngest daughters—
Richard Bellamy: No, one's a daughter-in-law. Daisy, married to Edward, who lives with her in-laws.
Hazel: Yes. Then Ruby, the youngest, rather simple child. Perhaps one day we'll all be one big family, not two.
Richard: I think we are now, in one sense. As for the future, I have my doubts, but then, tomorrow's a long way off.
— Season 4, Ep 9. "Another Year" January, 1917
Advertisement:

Upstairs Downstairs is a British (produced by London Weekend Television for ITV) period drama that ran from 1971 to 1975 (with a Revival in 2010; see below). It details the lives of the well-to-do Bellamy family of 165 Eaton Place and their staff of servants between the years of 1903 to 1930. Created by Jean Marsh (Rose Buck) and Eileen Atkins, who were tired of period dramas where the servants were voiceless extras.

Downton Abbey was its Spiritual Successor. 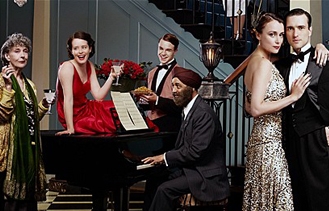 A very small part of the cast.
Upstairs Downstairs was resurrected in 2010, with the show now airing on The BBC. The revival series is set in the year 1936, and features the character of Rose Buck as the link towards the original series.

165 Eaton Place has been sold to a new family, the Hollands. Lady Agnes hires Rose Buck (now running a hiring agency for domestic help) to staff the house, but the new mistress's stinginess with salary hurts Rose's options for hiring new employees. She ultimately hires her best friend (the snarky cook), a rebellious young orphan (the maid), a former cruise ship butler (as head butler), a young teenager attendant with a dark past (the footman), a young wannabe fascist (the chauffeur), and Rose herself as the head housekeeper.

Upstairs, meanwhile, Sir Hallam Holland is secretary to Anthony Eden and a personal friend of the Duke of Kent. With the accession of Edward VIII and his relationship with Wallis Simpson and the growing rise of fascism in England, he's kept busy. His wife Agnes has her own problems - firstly, her mother-in-law has shown up after spending several decades in India, with the reveal that Hallam's father's will requires he provide his mom with a permanent home in order to keep his inheritance. Agnes meanwhile has her own problems: a high risk pregnancy that she fears will end with another miscarriage and her younger sister Persephone. Persephone is a head-strong fascist sympathizer who resents her dependence upon her sister and brother-in-law for financial help, causing her to act out.