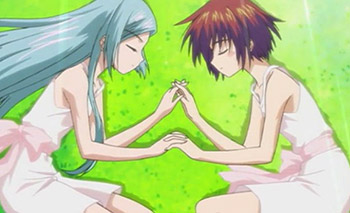 Not What It Looks Like.
"We like our ladies to go les... but not full les."
— Bryan Safi, That's Gay

In the eyes of fandom, a show's major selling point is that its principal characters are Schoolgirl Lesbians... but oops, it was just a Romantic Two-Girl Friendship after all! The viewers have been Ship Teased; and now that the writers got their attention, they can write more comfortable (to them) relationships. The lesbian subtext may not even last beyond the opening credits.

This is pretty common in Bishoujo fandom, where the Romantic Two-Girl Friendship develops for a number of unintentional factors. One could say that the audience likes girls in large quantities, and seeing two girls acting cute to each other, is better than one. One could also point out that far more attention is put into the interaction and communication between the girls; while a relationship with a guy just "happens" with most development offscreen. And if they're the only people you see but the show still maintains particular tropes, the audience is sometimes led toward an imagined payoff that might not be there. Often, this is coupled with a young age for both characters as well as the lack of any actual 'sexuality' in either character, barring concessions, as this outcome is harder to rationalize for an adult character. Note that any romantic relationship with boys, on the other hand, is considered completely serious at any age. Yes, it's hypocritical.

This practice tends to raise the hackles of a show's Yuri and LGBT Fanbase, who tend to crop up more infrequently, but also makes them paranoid in the long run. Any male friend of one of the girls becomes the Sword of Damocles; a possible route of escape for the writers via Last Minute Hookup. So expect malevolence. It takes frustratingly little for a male character to become a love interest. A single scene, or a "Where Are They Now?" Epilogue, can instantly make canon overturn entire seasons of meaningful interaction between female characters.

An ironic result of this is making a relationship explicit can result in enough fuel for viewers who oppose the shipping to simply scoff that any evidence of the pairing is "just fanservice." The fact that a great many shows avoid portraying relationships in significant detail muddies it further: so many other shows cop out at the last minute, so why should this one be different? The writers won't ever admit anything anyway.

This trope is also occasionally applied to male characters, usually in order to appeal to Yaoi Fangirls and an LGBT Fanbase without alienating homophobic viewers, in which case it's usually known as queerbaiting. Queerbaiting is usually considered quite homophobic, or at least patronising and cynical when it's done these days, but in the past was often the only way queer creators could make media featuring characters like themselves due to the values of the time. In these cases the Slash Fic fanbase often shows up to make the Subtext text.