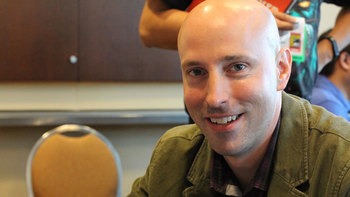 "Did you know that Elvis had a twin brother???"
Advertisement:

Brian Keller Vaughan (born July 17, 1976) is a well-regarded comic book writer, most famous for his creator-owned series Y: The Last Man and Saga, as well as for creating the Marvel Comics series Runaways. He went on to write a run on Swamp Thing, before creating Y: The Last Man, which brought him much critical acclaim. He then launched Ex Machina, which met similar acclaim; when the title ended, he concluded that he was better suited writing creator-owned books and has refrained from working on company-owned characters since then.

He had a temporary break from comic work while he worked on TV. In 2012, he returned to comic writing with the highly acclaimed Image Comics series Saga, followed in 2015 by Paper Girls.

He's become very well known for writing complex and highly memorable characters, for his Splash Panel cliffhangers, and for writing some of the most soul crushing endings in all of comics.

BKV was also a writer on Lost. He was also the show runner for Under the Dome, based on the Stephen King novel.