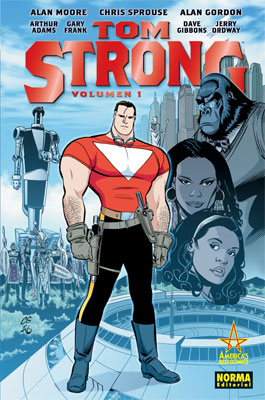 A reconstruction Science Hero Adventure Comic Book series created by Alan Moore, first published in 1999 by the America's Best Comics imprint. The series lasted for 36 issues (June 1999-May 2006), though Moore left after #22, returning for the final issue. The other issues were written by different guest writers, including Geoff Johns, Brian K. Vaughan and Ed Brubaker.

Tom Strong, the title character, is a classic Science Hero. He was raised in a high-gravity chamber and given an intensive education by his somewhat eccentric scientist of a father, on the fictional West Indian island of Attabar Teru. His upbringing, plus ingesting a root used by the natives of the island for health and long life, have made him nearly physically and mentally perfect. Though born at the dawn of the 20th century, he only appears to be in his forties as of the year 2000.

Strong has a wife, Dhalua, a native of the island, and a daughter, Tesla, both with enhanced physical and mental abilities and longevity. He resides in a building called the Stronghold in Millennium City. He is also assisted by Pneuman, a steam powered robot, King Solomon, a British gorilla with human characteristics, and the Strongmen of America, an organization of idolizing Tagalong Kids. His greatest foe was masked "science villain" Paul Saveen, though he has a wide ranging Rogues Gallery.

In general, the Two-Fisted Tales featuring the characters are pastiches of various genres of comic books and pulp heroes, though very much so with a modern sensibility and new takes on tropes used. The tone ranges from the wacky to the deadly serious, though Tom himself rarely strays far from stoicism. It also serves as a fun counterpoint to the severe deconstruction of pulp sensibilities that was the foundation of Moore's The League of Extraordinary Gentlemen. It also saw the revival of some of the obscure Nedor Comics stable, who are Public Domain.

For New York Comic Con 2017, DC revealed the cover art for The Terrifics #1, featuring the titular DCU team with Tom and his family. How the Strongs will interact with the DC multiverse remains to be seen.