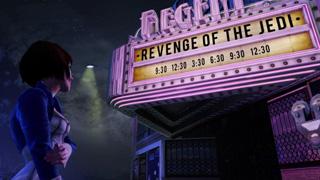 Don't think we don't have an article for that.note  Just barely!
"You're just like Indiana Jones; a role played by Richard Dreyfuss in our universe!"
— Alternate History Artie Ziff, The Simpsons, "Treehouse of Horror XXIII"
Advertisement:

This is a fictional counterpart of Richard Nixon, the Used Car Salesman — in Alternate Universes, your favorite books, movies or music might have never been created or may be different, sometimes even beyond recognition.

When the creators actually did the research, this may be based on What Could Have Been. It may also be related to Celebrity Paradox: In the fictional universe, actors who play the main characters usually don't exist, so other people took their other roles.

Or sometimes it's just done for sake of making a funny pun on a popular real-life work's title.