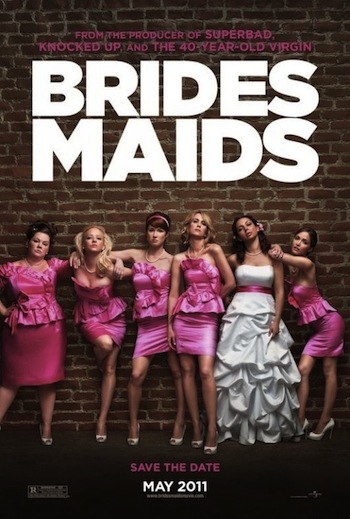 Bridesmaids is a 2011 comedy starring and co-written by Kristen Wiig of Saturday Night Live fame and co-produced by Judd Apatow, directed by Paul Feig. Wiig plays Annie, a single, late-thirties woman stuck in a dead-end job and a dead-end relationship. She faces a new source of anxiety when her old friend Lillian (played by fellow SNL alum Maya Rudolph) gets engaged to a rich guy and seems poised to leave Annie behind for her rich, fancy new friends, especially Lillian's prospective new best friend, Helen (Rose Byrne).

Designed as something of a Distaff Counterpart to The Hangover and other films of its ilk, the film was a massive success (both critically and commercially), showing that female-driven buddy comedies could be hits and launching others in its wake. It was also a Star-Making Role for many of its actresses, especially Melissa McCarthy.