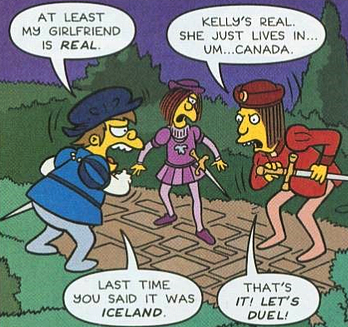 I wish you could meet my girlfriend,
But you can't because she is in Canada.
I love her, I miss her, I can't wait to kiss her,
So soon I'll be off to Alberta!
...I mean Vancouver!
(Shit, her name is Alberta, she lives in Vancouver...)
— Rod, Avenue Q
Advertisement:

A convenient way for a character to disabuse the idea that they're gay or otherwise too socially inept for a relationship is to claim that they indeed have a girlfriend — but the other characters have never met her because she lives in Canada. She doesn't visit very often, but when she does they just spend all day in bed. Look, here's her entry in his phone's contact list. No, you can't see a picture.

The idea is that since "she" lives in a different country, and presumably would have to get a passport and go through all that hassle in order to visit her "boyfriend", it's particularly tempting to make her Canadian as a way of discouraging others from asking too many questions. But if they do ask questions, it's almost de rigueur that any discussion of her living situation more detailed than "in Canada" will be comically inconsistent with any real Canadian geography or culture. It's also convenient for writers, who can make use of The Beard without having to write an actual character or cast someone to play her.

It's a very American trope by nature, not only because America makes so much pop culture but also because Canada's relationship with the U.S. means it can only really work there. Canada and the U.S. are separated by a border but are close by and share a common language; anything farther away would raise questions as to the girlfriend's exotic nationality and linguistic capacity. You won't see this in anime, for instance, because for a Japanese guy to pretend to have a foreign girlfriend would raise questions as to which of them is bilingual. In Britain, a "girlfriend in Ireland" doesn't need a passport to visit the UK (though this might change back thanks to Brexit), and a "girlfriend on the Continent" would probably speak a different language (although certain places in Continental Europe would make the prospect quite tempting for the hapless guy). A "Girlfriend in Australia" is a possibility, and it adds the wrinkle of time zones to the equation. Australia and New Zealand can theoretically do this with each other as they have similar relationships like U.S./Canada, though whether it shows up in actual writings is another matter. If the show is set in Canada, you can do a "Girlfriend in the States", but for safety's sake better put her far from the border and far from states that tend to have a lot of Canadian visitors like Arizona or Florida.

There are variants that don't require a different country at all. Schoolchildren can do it, claiming to their classmates that they totally have a girlfriend, but you haven't met her because she goes to a different school. Sci-fi or fantasy series with their own settings also have more possible options; you could put her on a different planet or dimension as long as it's not too difficult to get there. A setting with a Fictional Country may choose to use that country for the fictitious girlfriend.

If the character's friends are a little too forceful in calling him out on the girlfriend's non-existence, you can expect the most common subversion of this trope; the girlfriend will turn out to be real after all before the episode ends. If the character himself is from Canada, no one will question him having a girlfriend back home and it's not this trope at all.

This trope is closely related to The Beard, Operation: Jealousy, and Boyfriend Bluff. Could become an Invented Individual. See also Wedding Ring Defense and False Widow.