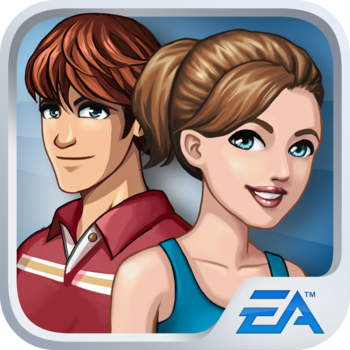 Live high school YOUR way!
Surviving High School is an iOS Visual Novel published by Electronic Arts. Originally launched in 2009, the series lasted five and a half years before ending in 2014. The app was an Episodic Game, releasing a weekly free episode once a week. Additional to its weekly release, there would also be bonus episodes and special content which were purchased as microtransactions.
Advertisement:

Surviving High School followed its characters attending Twin Branches High Schoolnote previously called Centerscore High School, after the original creators who are trying to, well, survive high school. The storyline can be broken up into five eras, each taking place right after each other, that focus on a different main character and supporting cast. Additionally, the app released a separate mini series called Magic School and a special called Battle of the Schools which came out after the conclusion of the game and explores a storyline that was shelved due to the writing taking a different direction.

The series also spanned two print novels, Surviving High School: The Novel and How To Be A Star, both of which were written by M. Doty. The novels are Darker and Edgier narratives, centering on the lives of two of the app’s characters, Emily Kessler and Kimi Chen respectively, and features several others from the game. Surviving High School: The Novel was released September 4, 2012 right after the end of The New Girl era and prior to the beginning of A New Start. Meanwhile, How To Be A Star came out May 21, 2013 during A New Start era.

A much more mature and adult sister game, Cause of Death, was released in 2010, and the two games had multiple crossovers over the years. Surviving High School also shares its universe with High School Story (where two of its characters Autumn and Wes feature in), Hollywood U Rising Stars and Choices: Stories You Play.

Has a Characters page in need of some help.

Tropes that apply to Surviving High School as a whole:

Football Star
The first era, nicknamed The John Era, is Football Star. In Football Star, players can customize their own character and play a choose your own adventure style episode where they can decide who they want to date, if they want to be friends or enemies with characters, become popular, win football games, and pass their classes. Four, shorter follow up episodes were released focusing on your character in college.

Tropes that apply to Football Star:

Advertisement:
The Classics
Following Football Star is The Classics also known as The Linda Era. The Classics is composed of a little over 40 episodes that were released on a weekly basis from September 2009 until August 2010. This time around, the plot revolves around main character Linda Byrne as well as an ensemble cast attending Twin Branches. Unlike Football Star, The Classics episodes are not simulation style but instead players must choose the right option so that they can get the correct ending to episode and advance the storyline.

Tropes that apply to the Classics:

The New Girl
After The Classics is The New Girl — dubbed The Zoe Era. Using the same play format as The Classics, The New Girl takes place from September 2010 to August 2012 and is the longest era, spanning over a hundred episodes. The protagonist is Zoe Hill and features a different supporting cast with the exception of a few characters. This is the last series prior to the reboot.

Tropes that apply to The New Girl:

A New Start
Subsequent to the end of The New Girl and the release of the Surviving High School novel is A New Start also called The Owen Era for its protagonist, Owen Harris. Due to a large influx of new fans following the publication of the novel, A New Start launched an app reboot with a brand new icon, music, character art and storylines to help them become antiquated with the world of Surviving High School. While The Classics and The New Girl focused on large, ensemble casts, A New Start has a significantly smaller set of main characters and takes place from September 2012 to August 2013. Additionally, another novel would be released during this period called How To Be A Star.

Tropes that apply to A New Start:

Troublemakers
The fifth and final era is Troublemakers or The Allison Era. It lasted from September 2013 to July 2014 and is only 28 episodes long due to a number of delays and technical difficulties. Like A New Start, this centers around a small group of core characters led by Allison Applebee before the game was officially cancelled.

Tropes that apply to Troublemakers: