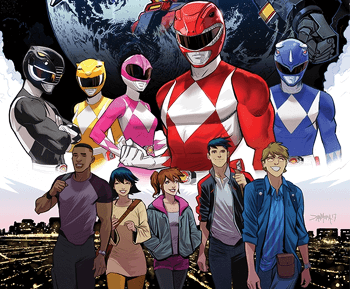 So the Big Bad has been unleashed, the rebellion needs more help over-throwing the evil empire, an Alien Invasion is destroying Planet Earth, a Zombie Apocalypse has begun, a deadly disease is spreading all over the world, or it's The End of the World as We Know It. Who do you get to help? A crack team of trained mercenaries? How about some expert martial artists? Maybe the existing peace-keeping forces such as the police or military? What about a team of super-scientists who have the required technology and mindsets to help stop the problem? How about an expert swordsman? Possibly a team of powerful superheroes who can stop the problem with their powers quick? Or how about a legendary warrior brought back from long ago? No? Then how about those kids standing over there? Yeah? Okay, cool, go for it.

This trope happens when, instead of getting qualified help from highly trained professionals, or at the very least, adults who are more likely to understand the risks associated with a possible life-or-death scenario, we're treated to a team of young people with little to no experience with whatever they're about to face and thrust into it head first. Often, the teens are given weapons or powers to defeat this threat, but are given little to no training with these things yet still come out on top. The story will likely give one reason or another for why they couldn't go with the above but out-of-universe demographic appeal is the chief reason.

This trope usually occurs in media aimed at kids and pre-teens, as that's the sort of audience who looks up to high schoolers as the pinnacle of human achievement, or at the very least are more relatable than some "crusty old" 30-somethings. Ironically, many such shows, if live-action, will invoke Dawson Casting and those "teenagers" won't really be teenagers anyway.

Many stories sometimes have a token teenager, or may even have a whole sub-cast of children, but this trope is for when most or all of the main cast are teens (or younger). So Wesley Crusher from Star Trek: The Next Generation wouldn't count here.

Contrast Teens Are Monsters, which instead focuses on the teenage characters being portrayed as villains or antagonists.