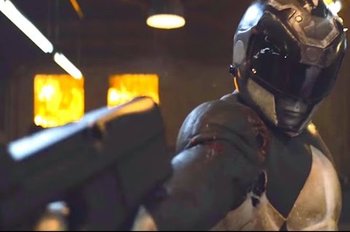 Far from your daddy's Mighty Morphin' Power Rangers.
Power/Rangers is a 2015 Short Bootleg Universe Fan Film, written by Joseph Kahn and Dutch Southern, and directed by Kahn. It was produced by Adi Shankar and Jil Hardin, and released on YouTube and Vimeo on February 23, 2015.
Advertisement:

We all know Power Rangers, right? That kids' show where goody two-shoes teens fought the Monster of the Week every Saturday morning and was always on the idealistic side of the Sliding Scale of Idealism vs. Cynicism? Well, this isn't that kind of fan film. This fan film chooses instead to be a Satire of Hollywood blockbusters that adapt kid-friendly franchises, but make things Darker and Edgier to attract an older audience, taking it to a logical extreme by presenting a vision of what an R-rated version of Power Rangers might look like.

In this Alternate Continuity, the timeline diverged from the events of Power Rangers Zeo when the Machine Empire actually defeated the Power Rangers. With nothing left to stand in their way, the governments of the Earth agreed to permanently disband the team as part of a peace treaty, as the surviving members are left to adjust to a life under their occupation. Years later, many of the former Power Rangers have been killed under mysterious circumstances, and Rocky DeSantos, now working for the Machine Empire, has to interrogate Kimberly Ann Hart in order to find the whereabouts of Tommy Oliver.