Manga / The Lucifer and Biscuit Hammer 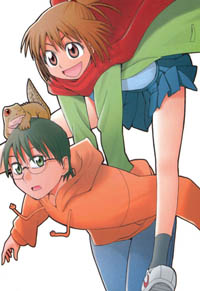 An adorable wannabe planet-crusher, a shut-in who'll do whatever she says, and a talking lizard. These are our heroes.
"One morning when I woke up, there was a lizard in my room. We stared at each other, and the first to break the silence... was him."
Advertisement:

Amamiya Yuuhi, college student, wakes up one morning to find a talking lizard informing him that the world is in grave danger; a powerful Mage is plotting to destroy it with the "Biscuit Hammer" — a gigantic mallet floating in space, ready to deal out a final, apocalyptic smash. To stop this, he must join forces with a ragtag group of Beast Knights and protect their Princess, who stands in the way of the Mage's plot.

Unfortunately for the lizard, Yuuhi is a bit of a misanthrope and wants no part in saving the world. But he is interested in serving the Princess, especially when she announces that she only wants to save the world so she can destroy it herself!

A thoroughly strange (in the best possible way) comedy/adventure/romance manga, Satoshi Mizukami's The Lucifer and Biscuit Hammer, or Hoshi no Samidarenote It's written as "Wakusei no Samidare" ("The May Rain of the Planet(s)") began in 2005 and enjoyed a successful five-year run. It's gained a devoted cult following outside of Japan, who have finally been treated to an official English version - Seven Seas Publishing has released the series in two-in-one volume collections (as Lucifer and the Biscuit Hammer), starting with Volumes 1 and 2 together in November 2014, up through 9 and 10 released a year later, completing the series. The manga can also be read fully translated via Crunchyroll.

It's getting an anime adaptation in Summer 2022

and will be broadcast on TBS note  and it's Osaka affiliate MBS and BS11.

Not be to confused with Lucifer's Hammer.

The Lucifer and Biscuit Hammer provides examples of: