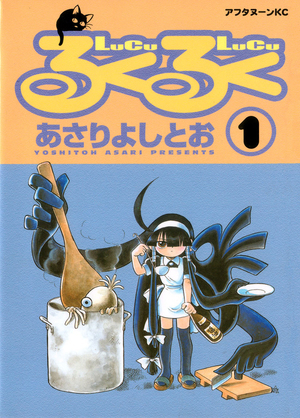 Ryokan: "You said this world was created by God?"
Itsukyuu: "Which sukiyaki did God create?"
Lumiel: "...God did not create sukiyaki."
Ryokan & Itsukyuu: "Your God can't even make a decison between Kanto and Kansai styles!?"
Lumiel: "SHOULD MONKS EVEN BE EATING BEEF?"
— A fight over religion.
Advertisement:

Lucu Lucu is a gag manga by Yoshitou Asari, which ran in Afternoon from 2001 to 2009. The story revolves around the daily life of Rokumon Suzuki, Princess Lucuha and her demon pals (who are all squatters in Rokumon's home) including Bubu, a sort of Deadpan Snarker and comedic foil to Rokumon and Lucu. But wait, there's more! We also have Rokumon's father and the angels that come to Earth in order to find out the demons' plans. However, unlike normal demons, Lucu is different. She feels human emotions and has a sense of duty to care for Rokumon and others, which the angels always mistake for some sort of diabolical plot. Hilarity Ensues.

It's a cutesy seinen manga, and has a few Puns. The plot isn't necessarily the focus, rather the interaction of the characters with each other is highlighted in the first 40 chapters or so. Rokumon seems to be familiar with Lucu, and he has a difficulty remembering his childhood, a mystery presented in the story, and he only knows that it was absolutely horrible, since his mom is presumably dead, and his father was a drunkard who gambled most of his money away.

It also likes to make fun of religions. All religions.

The manga as a whole provides examples of: