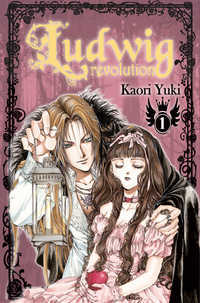 Ludwig Revolution is an idiosyncratic take on classic fairy tales, told as only Kaori Yuki can. The central story is about the flamboyant, narcissistic Prince Ludwig as he travels across the land in search of a suitable wife. Accompanied by his trusty manservant Wilhelm, Ludwig encounters a diverse cast of fair maidens from various fairy tales. Snow White, Cinderella and many more are completely retold, and the resulting stories are sometimes unexpectedly hilarious, while at other times cruelly twisted.

The manga was serialized from 1999 to 2007; it originally began in the Shōjo magazine MELODY, but moved to the Hana to Yume line of magazines (bouncing from Bessatsu to the regular one) for the rest of its run. A short sequel, Ludwig Gensokyoku, ran in Bessatsu from 2012 to 2013.