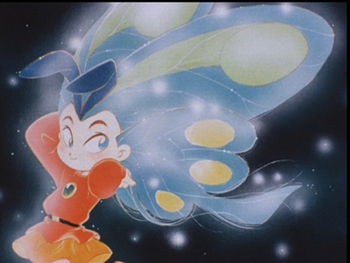 Wings that sprout out of a person's head where her hair would usually be. In some cases the person has normal hair that she can transform into wings, while in other cases she will have Hair Wings as a permanent anatomical feature. Often the wings look rather hair-like, especially the parts close to the scalp. Almost Always Female, because Long Hair Is Feminine.

Sometimes overlaps with both Power Gives You Wings and Power Makes Your Hair Grow.