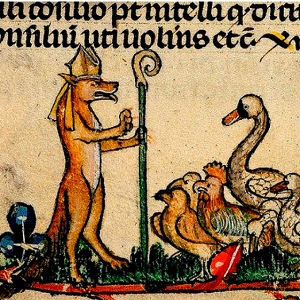 Satire is a form of humor, and is considered the cruelest form of comedy. Satire points out the folly of people, organizations, institutions, and ideas.
Advertisement:

Often, satire will use fictional counterparts of real people as characters, as a parody of Real Life. However, a satirical work can also use original characters to explore the foibles or ramifications of an organization or course of action.

Satire often relies on current events, which raises a danger that it won't be appreciated in another era. The poetry of Pope and Dryden satirized English politics of the 18th century, but few would appreciate the humor now. The best satire can still be appreciated on its own merits even after the thing it's criticizing fades from consciousness. Occasionally, a piece of satire regains relevance in similar circumstances; for example, satire aimed at George Bush I (or, perhaps more justifiably, Richard Nixon) can often be easily applied to Bill Clinton; 1990s "look at the old guy!" barbs at Bob Dole were recycled in 2008 to target John McCain.

The Roman poets Ennius and Lucilius are considered the progenitors of the genre, though almost all of their work has been lost. Latin satire was generally delivered in verse, like most literature of the time. It was considered the sole branch of literature native to Rome and there was no Greek equivalent, though some Greek comedy, such as Aristophanes, had elements that we would consider satiric. Horace, Persius, and Juvenal are perhaps the three most famous Roman satirists, ranging from good-natured (Horace disposing of a dreadful bore) to savage (Juvenal's condemnation of sodomites pretending to be philosophers). They are for the most part preoccupied with urban life, morality, and how other people suck.

Literary convention divides satire into the Horatian (good-natured, almost affectionate, light-hearted, and more likely to view the target as foolish rather than evil) and the Juvenalian (contemptuous, abrasive, scornful, and outraged, relentlessly mocking a target often regarded as outright evil).

See also Parody, Pastiche, Farce, Meta Trope Intro. Compare Deconstruction, as a lot of satire incorporates elements of it, as well as Black Comedy and Take That!. See also The Comically Serious, which is often a key component of satire.

Don't call yourself a satirist unless you satirize satire.

Don't call yourself a satirist unless you satirize satire.