Come take me far away. 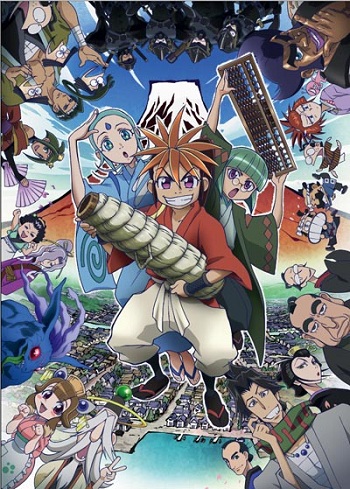 Sora, Seikichi, Shunpei... and the whole wacky cast of everyone else.
Advertisement:

In Edo during the mid-1800's, fireworks maker Seikichi Tamaya and his friends struggle to live under the harsh frugality laws imposed by the strict city magistrate, which ban all luxuries, including fireworks. One day, a strange girl named Sora stops by Seikichi's shop with an equally strange request: she wants Seikichi to build a firework that can reach the moon. It doesn't take long before Seikichi and the people of the poor row-house where Seikichi lives all find themselves trying to help her dream come true. However, not only do they have to hide the fireworks from local authorities, but there are rumors of mysterious "sky beasts" running rampant around Edo as the bodies of young women are found with their blood drained.

Oh! Edo Rocket is an anime that was shown in Japan during 2007, with an English-dubbed version from Funimation released in late 2010. It is loosely (and we mean loosely) based on a stage play written for the Gekidan Shinkansen theater troupe by Kazuki Nakashima. It is by no means a period piece, even though the story gets very dramatic.