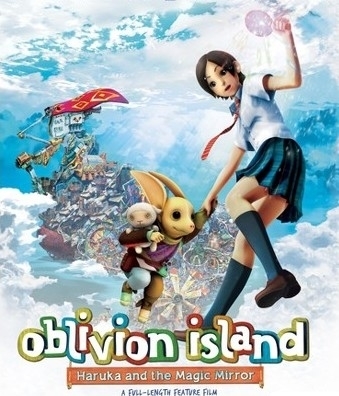 Oblivion Island: Haruka and the Magic Mirror is a Japanese CGI animated film by Production I.G, released in 2009.

16-year-old Haruka is on a mission to find her mirror, a precious childhood gift from her mother that mysteriously disappeared. While following a strange foxlike creature in the woods, she tumbles into a mystical world where once-cherished toys and treasures go when their owners neglect them.

Haruka sets off to find the mirror, but must contend with the Baron, the evil ruler of the island who wants the mirror for his own purposes. She also meets the fox boy, who's named Teo, a gang of wicked thieves, a trio of foxes who bully Teo, and her lost plush toy Cotton. Haruka must decide who, if anyone, she can trust in this strange land as she works to get the mirror back.