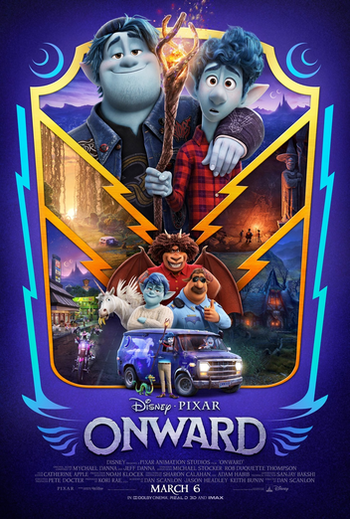 In times of old, the world was magical.
But times change.
Barley: We are going on a grand and glorious quest!
Ian: It's not a quest. It's just a really fast and strange errand.
Barley: It's totally a quest.
Advertisement:

Onward is the twenty-second CGI animated feature made by Pixar, directed by Dan Scanlon (Monsters University) and released on March 6, 2020. It is the very first Pixar film to have no involvement whatsoever from company founder John Lasseter.

Set in a world where mythological creatures like elves and dragons evolved into modern suburbia, the film tells the story of elf brothers Ian and Barley Lightfoot (Tom Holland and Chris Pratt, respectively), who embark on a quest in search of magic that they hope will allow them to spend one day with their father, who died when they were too young to remember him. The film also stars Julia Louis-Dreyfus as their mother Laurel, plus Octavia Spencer as Corey.

The film also featured the first Disney-produced Simpsons short played before the feature film, titled Playdate With Destiny. It too was released on Disney+.

Magic gets supplanted by technology in this prologue, as the latter is far easier to use.

Example of:
The Magic Goes Away

Magic gets supplanted by technology in this prologue, as the latter is far easier to use.