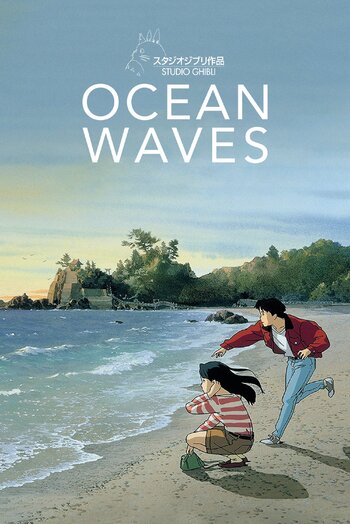 No wonder they can hear the Ocean
Advertisement:

A 1993 made-for-TV animated film from Studio Ghibli, Ocean Waves (海がきこえる / Umi ga Kikoeru, translated as I Can Hear the Sea) was based on the novel of the same name by Saeko Himuro and directed by Tomomi Mochizuki.

The movie concerns Taku Morisaki, a young man from Kochi, Japan, looking back on his high school days and recalling the Love Triangle between himself; his best friend, class president Yutaka Matsuno; and beautiful transfer student Rikako Muto. During a class trip to Hawaii, Rikako cons Taku out of a large sum of money so she can go visit her father in Tokyo, but Taku unexpectedly gets mixed up in her plans and goes along with her. There, he learns that there's a lot more to the troubled young woman than he thought. Back at home, Taku's clandestine trip with Rikako causes friction between him and Yutaka, who's had feelings for Rikako ever since he met her.

Ocean Waves was the first Ghibli film not directed by Hayao Miyazaki or Isao Takahata. It was conceived as a test run for Ghibli's younger staff members to prove they could make a quality film quickly and cheaply. However, it went both over-budget and over-schedule, and was not considered a success. The film was released in Europe in 2008 and Australia in 2010 with English subtitles. It was not picked up for release in North America, until 2016, when GKIDS announced that they would release the film in theaters in that same year with a home release the year later, albeit subtitled only.