Anime / Negadon: The Monster from Mars 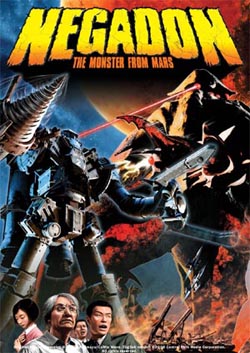 Negadon: The Monster from Mars is a short CGI film that pays homage to the Giant Monster movies from the 1960s. This includes having a grainy-old-film look, spaceships that look like toy models, etc. Despite this, it has a story that is played completely straight and the quality of the graphics is very high.

The story takes place in the future, when humanity begins exploring Mars for colonization. They find a strange object there and, of course, bring it back to Earth, where it turns into a monster and starts destroying Tokyo. A scientist named Dr. Narasaki, who has been in seclusion ever since the accidental death of his small daughter, is stirred into action and brings his old giant robot out of storage to fight this menace.