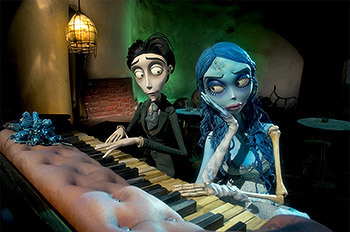 Can you guess which of these two characters is dead? Check The Stinger for the answer!
Guillermo: Is she a vampire now?
Nandor: Well, she's got fangs and the white pale face, it's a pretty major clue.
— What We Do in the Shadows
Advertisement:

In fiction, if you run into someone who looks like a corpse, it's not that they're sick, it's that they're dead.

Characters who become one of The Undead will develop pale or sometimes blue or green tinged skin. In severe cases with visible (and deathly still) purple veins underneath the skin. Even people of color*  (Or fake tan. Can you imagine facing an undead eternity with skin the color of a bleached out orange?) who were dark-skinned in life will have it turn ash grey, or dark like soot.

A living character who is just pale is usually a perfectly mundane case of an Eerie Pale-Skinned Brunette, who has heard all the jokes about waking up on the wrong side of the coffin. There may be some Unfortunate Implications here though since in fiction there's a strong correlation between being pale and going over to The Dark Side. In addition, living characters who come into contact with the dead, undead, or infernal may have a change of color and become Hades Shaded. This is the case with necromancers, infernalists, those under ghostly Demonic Possession, someone bitten by zombies or a vampire, or The Renfield who has fed on vampire blood. It doesn't stop there either, centuries of sunless existence may turn the character evil.

This trope is so common it's usually a dead giveaway that something is wrong with Alice/Bob when they suddenly show up this shade of pale. Smart characters will have their Not a Zombie sense ping them as being "somehow off". Which of course makes the defiance of this trope a #1 priority on every smart undead's list of Masquerade reinforcing tricks. Settings where this trope is subverted have much more dangerous undead for being indistinguishable from the living. Another curious exception is that sometimes people who were brown-skinned or darker in life may look exactly as vivid after death as they did when they were alive for unexplained reasons. Probably something to do with the Special Effects budget and wanting to avoid a gaffe.

Truth in Television, as once you die, the blood moves due to gravity to the lower parts of your body (if you are lying on your back, then it pools there). It's called Post-mortem lividity. So if your skin looks drained of blood, it's because it is.