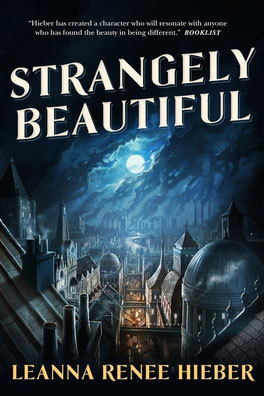 The Strangely Beautiful Series is a series of Victorian Gothic novels about Percy Parker, an albino girl who sees ghosts, written by Leanna Renee Hieber. After being raised by nuns her entire life, she is sent to Athens Academy on her 17th birthday so she might have a chance to make it somewhere in the world. While at Athens, her fate becomes tied up with the guard and their leader, Alexi Rychman, who is a mathematics professor at Athens. The guard is this world's last line of defense against the forces of the netherworld and they need to figure out that Percy is their last hope before it's too late.

The Strangely Beautiful Series is a quartet of novels and various short stories documenting the world of Percy Parker and the guard. Common elements include long titles and using words like lyrical, ethereal, mystical, gothic, supernatural, and Victorian to describe the books. Each of the four books has amazing cover art which can be viewed here.