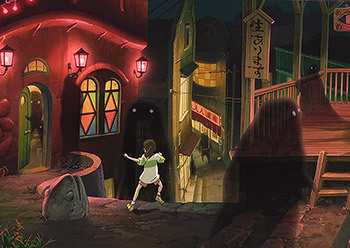 The spirit world is the home of spirits and archetypes, little gods, ancestors, totems, elementals, angels (when they're not in Heaven) and demons (when they're not in Hell), embodied ideas and a symbolical mindscape. It can get quite crowded if All Myths Are True, but fear not, the setting's metaphysics will be usually more restrained than that.

Sometimes characters can reach it when they have an out-of-body experience, when they enter in a trance (with or without drugs) or when they use shamanistic magic or Psychic Powers to project themselves into the astral plane. They can go there to meet their Spirit Advisor, increase their power, go on a spirit quest, learn invaluable information and get cryptic advice. Well advised characters are often warned not to eat or drink anything while they're there.

Any depiction of the spirit world is sure to feature some level of Mind Screw and Rule of Symbolism, run high on Motifs and be under the sign of Absurdity Ascendant.

Compare with the Dream Land and Journey to the Center of the Mind. Not to be confused with Dark World. See also Magical Underpinnings of Reality.