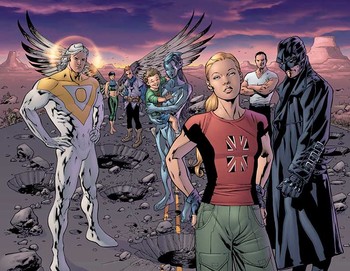 Don't piss them off.note From left to right: Apollo, Swift, The Doctor, The Engineer with Jenny Quantum in her arms, Jenny Sparks, Jack Hawksmoor, Midnighter
"We're here to give you a second chance. To make a world worth living in.
We are The Authority. Behave."
— Jenny Sparks
Advertisement:

Created by writer Warren Ellis and artist Bryan Hitch, The Authority took the standard superhero tropes and shook them up with a manga-influenced "widescreen" style that used splash pages and large panels to make the business of saving the world actually look impressive for once.

The original series appeared in May, 1999 as a Sequel Series to the recently-cancelled Stormwatch, where most of the team members first appeared—during Warren Ellis' run—as members of the Stormwatch Black Team Division. Ellis started The Authority by blowing up Moscow and continued in suitably bombastic fashion, threatening the Earth with an imperialistic army from an alternate universe and a battle with God itself. Hitch's detailed but kinetic panels conveyed the action with aplomb, and the series' style essentially spawned the trend for Decompressed Comics.

Later writers took the team in a slightly different direction. Picking up on the idea that the team originally formed to improve the world, not just save it, they had them executing dictators, defusing international crises and even pulling a coup d'etat on the US government itself. However, as Status Quo Is God, they have only rarely been able to effect any kind of serious change.

The team's original members were:

Both Jenny Sparks and The Doctor eventually died and were replaced by Legacy Characters, Jenny's next incarnation (Jenny Quantum) and another Doctor, respectively. By 2007, the other members remained in the team, and other characters, such as Rose Tattoo (Another ex-Stormwatch member and the Spirit of Murder, transformed by the current doctor into the Spirit of Life), joined.

As the series went on, the stories tended to get more and more outrageous, not to mention Anvilicious.

Rather aggressively satirized in the Superman comic book What's So Funny About Truth, Justice & the American Way? and its Animated Adaptation Superman vs. the Elite, in which their Expies beat up Superman, who was concerned about both their violent methods and the pointlessness of killing them when they appear to be a symptom of the times rather than the cause of it... and then demonstrated that they shouldn't have made him mad.

With the 2011 DC reboot, the Wildstorm characters were absorbed into the larger DC Universe, and the rebooted Authority characters became the core of a new Stormwatch. After their book ended in 2014, Midnighter went on to receive his own solo title, starting June 2015. The Wildstorm imprint would be revived with a brand new universe, with the first series, The Wild Storm, featuring a new team akin to the Authority, though they don't call themselves by any particular name. In 2021, as part of the DC Infinite Frontier initiative, the title will be revived as a four-issue mini-series called Superman and the Authority, which has the Man of Steel create his own team to help him liberate the alien slave world Warworld.

If you’re looking for the WWE faction that began causing the downfall of the company, look here.

The Authority series contains examples of: