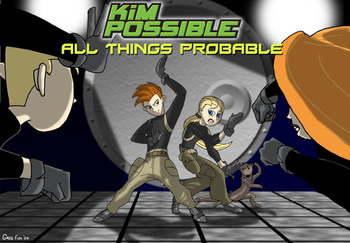 The Kim Possible fanfic All Things Probable by Slyrr (aka Greg Fisk) introduces Team Probable, a group of mercenary opposite numbers to Team Possible.

The story begins with a shadowy teenage figure defeating Team Go by outwitting Hego (admittedly not terribly difficult), and continues with Team Possible responding to what appears to be a routine tip about an impending theft. On that mission, Kim, Ron, and Rufus encounter Grimm Probable, his sidekick Rhonda Fatigable, and Rhonda's pet weasel Rueful. After some initial banter that reinforces the weird mirror-image duality, the two teams face off. During the confrontation, Wade's attempt at providing remote assistance is thwarted by Jade, Team Probable's hacker.

After holding Team Possible to a draw, Team Probable gets away, revealing that they weren't actually trying to steal anything — they were just hired to run interference while their client made his own move. Kim is left unsure of herself, with Grimm's gibes still ringing in her ears, but determined to win when they meet again.

The stories in the series are (in sequence) Fanfiction.net

features author-illustrated versions of most of these stories (except for the epilogue of "A Friend in Darkness" and "A Little K/R Fluff").