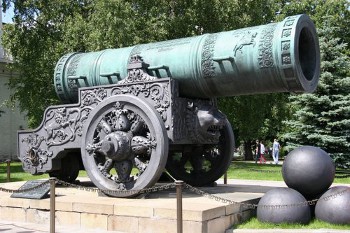 "A cannon can be used to reinforce canonicity".
"Warning: The game you are about to play is canon." [sic]
— Barkley, Shut Up and Jam: Gaiden
Advertisement:

Canonicity, as it applies to television series, is substantially different from its literary counterpart. For example, there is no question of which Sherlock Holmes stories (the first non-biblical literary works to which the term was applied) are canonical: those written by Doyle are, everything else isn't.

Television canonicity works much differently, as there are many authors involved. Works not officially sanctioned are generally outside of canonicity, but what remains inside is more nebulous. Officially licensed material, novelizations and tie-in novels are not usually considered canonical. Even broadcast material can be excluded from the canon when decreed by Word of God.

The primary issue is that canons for completed works (especially with a single author) are descriptive, whereas fans' attempts to define canonicity for ongoing works are prescriptive. If a fact is canonical, you are not allowed to contradict it.

The concept of canonicity is almost entirely an invention of fandom. The writers will ignore, include, or change whatever facts they damned well like. This is not to say that the writers totally lack a sense of continuity, but it is a much weaker concept than "canonicity" as presented by fan communities. Writers can tweak continuity quite a lot without actually breaking it by using Broad Strokes.

In fan communities based on very loose continuities, what is "canonical" can sometimes boil down to "the bits we like". Fans will attempt to find any excuse to "de-canonize" facts that they personally find inconvenient.

A related term is Deuterocanon

(known here on TV Tropes as Word of Dante), which in this context refers to those persons, places and/or events which are not explicitly shown on-screen, but which are considered "official" or close to it. For canonicity that comes not from the source material but from pronouncements by the creator, see Word of God. For the contrary idea that something is canonical only if it appears in the source material (external opinions of the creator, Dummied Out content, and Deleted Scenes not included), see Death of the Author.

Continuity is another related, but very distinct term. While canon refers to what works do and don't count, continuity is the story groups themselves: long-running franchises may tell many stories which all have their own considerations of what's canon to them. For example, Transformers has the 1984 cartoon, the Unicron Trilogy, Animated, and more that all have similar elements, but aren't connected to each other despite being part of the same franchise.

The concept of canon is related to the literary term used to describe a body of work that is considered the foremost in quality and significance. For example, if one refers to the English-language literary canon, it is understood that one is speaking of books such as A Tale of Two Cities by Charles Dickens, Moby-Dick by Herman Melville, Pride and Prejudice by Jane Austen, and Heart of Darkness by Joseph Conrad—in other words, most of the books you read in High School are part of the English-language canon.

Many video games (and especially Visual Novels) have the problem of the Story Branching into Multiple Endings, thus creating a number of mutually exclusive but canonical happenings. This becomes particularly relevant when the source material is adapted to a linear medium like a TV series and one of the paths has to be chosen, adding "extra canonicity" to it. The same applies to sequels. Choose wrong, and the original fans will be up in arms; and there likely is no right answer. See Tsukihime for an example. Most frequently, the "good" ending is the one chosen (because the "bad" ones usually leave too many of the principals dead).

Canonicity should not be confused with Fanon, but everyone does it all the time. See Fanon Discontinuity for when people decide en masse to disregard actual canonicity, and Canon Discontinuity when the writers do it. Alternatively, see the Continuity Tropes index for all related concepts. Official Fan-Submitted Content is when the creators ask the fans to add to the canon.

And finally, before you click away, a quick note: "Canon" is a word that has pracically lost all inflection so it's the same whether it's a noun, adjective or verb, but in the interest of learning we'll briefly talk about its (now mostly meaningless) forms: "Canon" (or "non-canon") is a singular noun that refers to the official story of a work - typically according to the writers of said work - and uses an article ("the" or "a"); the plural being "Canons". Contrast "Canons" wih "Canonicity", which is the static form

Examples of canons in fiction