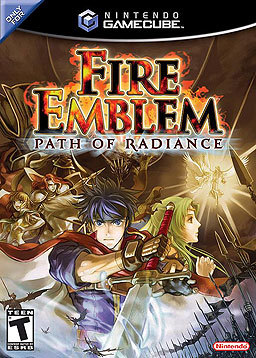 Strength alone does not make one powerful or strong.
Advertisement:

Fire Emblem: Path of Radiance is the ninth game in the Fire Emblem series, released on the Nintendo GameCube in 2005 to coincide with the series' 15th anniversary. It is the first of two games that take place on the continent of Tellius, seemingly completely disconnected from the canon of previous entries. Path of Radiance is the first home console Fire Emblem since Fire Emblem: Thracia 776 back in 1999, the first game in the franchise to feature voice acting and the first console game to get an international release. The CGI cutscenes were animated by Digital Frontier.

The game stars mercenary Ike, the first main character in the series to not be nobility or royalty, as he aids Princess Elincia in reclaiming her kingdom of Crimea (no relation to the real life peninsula of the same name) after its fall to the suddenly-aggressive nation of Daein. However, the way to gain a force strong enough to oppose the Daein Army is far more complicated.

Path of Radiance is something of a return to the style of Fire Emblem: Genealogy of the Holy War and Fire Emblem: Thracia 776, with more complex and linked plotting. The game also reimplements the Anima magic triangle and the Skills system in full after their absence in Game Boy Advance titles, along with adding new features like the base menu and Bonus Experience. It also introduces the Laguz, an animalistic race whose combat revolves around transforming into animals.

Path of Radiance is followed by Fire Emblem: Radiant Dawn, a direct sequel on the Wii that takes place 3 years later.

Fire Emblem: Path of Radiance contains examples of the following:

note Unfortunately for Jill, Ashnard is way too decked with protection and defenses, plus his goddess-blessed armor, that she could never even harm him despite her rage