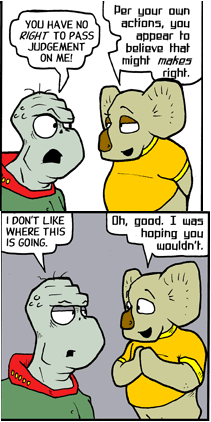 Hey, at least he's fair.
"The tragedy of Earth is not that so many died. Death is an inevitable part of life. The tragedy is that so many died as victims. When the crisis came, they were helpless, unable to use their deaths to buy anything of value. Millions of otherwise intelligent people had been tricked into ignoring a fundamental truth: that no man has any rights if he is unable to personally defend them."
— Col. Corazon Santiago, "Planet: A Survivalist's Guide", Sid Meier’s Alpha Centauri

"I am stronger than you, therefore, I make all the rules." This very simple aphorism can be used by a character of virtually any level of intelligence. Whether it's the thug with a club or a super genius with a kill sat, it is the same. Their power justifies whatever it is they do.

Remember that physical strength is not necessarily the determinant here. Monetary wealth, political power, and just about any form of bullying can take the place of this. (Not that any professed adherent to this will necessarily admit it; the bully who uses physical strength may regard an ambush or other clever plan as cheating.)

Truth in Television for the vast majority of human history, including today. Fortunately for those of us living in Real Life, the whole idea of Knights In Shining Armor, True Warriors, and "Comes Great Responsibility" is to espouse and encourage the virtuous use of power. The truth is that "Might" is a weapon like any other: its effects depend on who wields it. It is possible to use might for good. Unfortunately this often still puts those who are weaker at the mercy of those with power, who can only hope that they use it justly.

War, however, is extremely expensive, both in terms of actual money and in terms of human lives, and tends to leave both sides the poorer for it, which is why people are generally encouraged to settle conflicts with something other than their fists.note This applies to one-on-one fights as well, which is why most species, including humans, have developed elaborate threat displays and mock-fights. It's a lot better for both sides for one to realize they're outclassed and back down, than it is for both to keep at it until one winds up dead, and the other probably maimed. This is where the "violence is evil" underlying assumption comes from: someone who resorts to violence must be too stupid to use any of the more peaceful conflict-resolution tools. Or worse, are actively looking for any Pretext for War because they know they'd lose in a peaceful conflict resolution. People and countries are often more than happy to use it as long as they're the ones with the power, but complain when it is applied to them.

Fictional characters taking this trope seriously can lead in all sorts of more specific directions:

See also Appeal to Force in Logical Fallacies. The Hedonist, when they are a powerful character, will usually use this logic. Related is Mutually Assured Destruction, when both sides are so powerful that peace is maintained precisely because both sides are too mighty to fight without destroying everything they were fighting for.