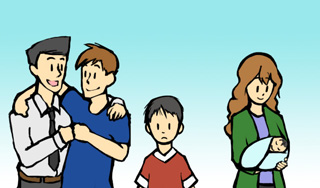 Image courtesy of robusterwiz.
"Personally, I have always suspected it is something far simpler: Kit doesn't like the little ones getting all the attention for being small and cute, and Lochan and me telling everyone what to do, while he's stuck in no-man's-land, the archetypal middle child with no partner in crime. Now that Kit has gained the necessary respect at school by joining a gang who sneaks out of the gates to smoke weed in the local park at lunchtime, he bitterly resents the fact that at home he is still considered just one of the children."
— Maya Whitely (about her middle child brother Kit), Forbidden
Advertisement:

Everyone loves the oldest child because the parents can rely on them, they watch out for their siblings, and they're so confidently attractive. The Youngest Child Wins because they're the "baby". But what does that leave the one in the middle?

That's essentially the definition of Middle Child Syndrome, in which a child automatically may become The Unfavorite or the rebellious Black Sheep, specifically because they are the easiest child to overlook. They're not old enough to be given the responsibilities and privileges of the oldest, and the youngest child took their spot as the spoiled and doted-on "baby" of the family. This tends to be more of an issue when there are three children rather than four or more. Oftentimes in media, the middle child ends up becoming more of the Deadpan Snarker or the quirky one for this reason. That, or they end up the best-adjusted between the overly-responsible elder sibling and overly-privileged younger.

Can be somewhat avoided, but not always, if the middle child is special by being of the opposite gender than their siblings, which can give them a unique dynamic with the rest of the family.

Truth in Television, to varying degrees note  As Carl Jung puts it everyone is an exception to the rule. It's common to blame or demonize the parents, but in most cases, they do not realize the situation and need it brought up to them. There are also times when the parents do see there is a problem but do not know how to handle it.

Contrast Only Child Syndrome, which tends to have the opposite effect of too much attention rather than too little.

For the trilogy variant of this trope, it's Sophomore Slump.