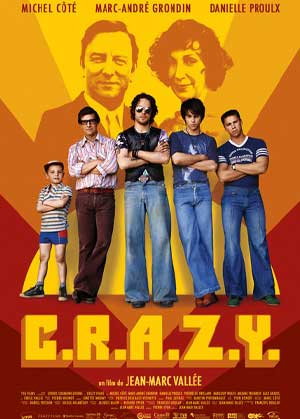 "Growing up in this family, you'd have to be C.R.A.Z.Y."
Advertisement:

C.R.A.Z.Y. is a 2005 French Canadian film directed by Jean-Marc Vallée (Dallas Buyers Club). The film is set from the 1960s to the 1980s. It follows Zac, the fourth of five brothers of the Beaulieu family. His brothers are Christian the Bookworm, Raymond the drug addicted Casanova, Antoine the Jerk Jock and Yvan the…uh…youngest. His mother, Laurianne, is a devout Catholic; she is convinced that Zac is a miracle child due to consulting a Tupperware-selling mystic. His father Gervais is concerned with having his sons grow up as manly men, not sissies. This takes a toll on Zac his entire life due to being gay.

The ultimate Coming-Out Story, C.R.A.Z.Y. follows Zac’s efforts to stay in the closet despite the fact that everyone, even his family, at some level knows.