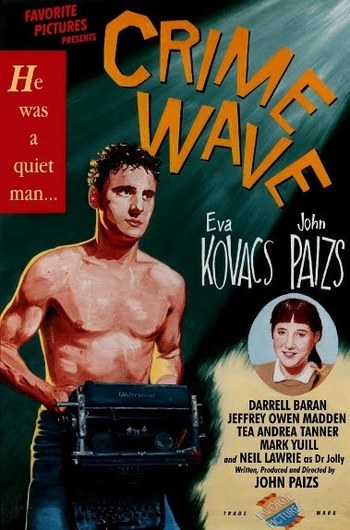 This very odd movie stars Eva Kovacs as Kim, a 13-year old girl in Winnipeg, Manitoba. Kim is excited when Steven Penny (John Paizs) a would-be screenwriter of "color crime movies", moves into the apartment over the garage. Kim imagines that Steven is a Hollywood big shot, but Steven is an utterly incompetent writer. He keeps coming up with various ridiculous scenarios for his movie Crime Wave, with idiotic beginnings and absurd endings, but can't come up with a middle.

Kim develops a schoolgirl crush on Steven and encourages him, but Steven still can't come up with a middle for his movie. Steven is at his lowest ebb when Kim finds a classified ad offering screenwriting help, placed by one C. Jolly. Steven joyfully goes off to meet Mr. Jolly, but it turns out that Jolly has something up his sleeve.

The above description doesn't really convey how weird this movie is, with the hammy acting, the rictus grins, the nonsensical plot, the dime-store special effects...if Ed Wood and David Lynch had ever made a movie together, Crime Wave would be that movie.

Not to be confused with Crimewave (one word), a Sam Raimi film that was also released in 1985.