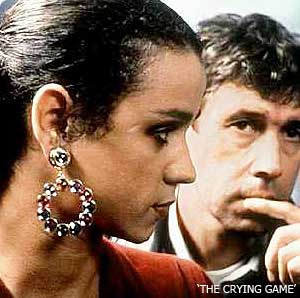 The original great confuser.
Those eyes, those thighs,
Surprise!
It's the Crying Gaaaaame!
I didn't order that!
— Billy Crystal (to the tune of "The Tender Trap"), during his famous song-and-dance bit at the 1993 Oscars
Advertisement:

So you want to know about The Crying Game? The movie is best remembered for its now-infamous plot twist, but there's more to it than that.

Fergus (Stephen Rea) is a grunt in the IRA. He and his cell capture a British soldier stationed in Northern Ireland, Jody (Forest Whitaker). They hold him hostage, hoping Britain will release one of their own in exchange for Jody's safety. If the British government refuses to comply, the IRA will execute Jody. Fergus is only supposed to guard the prisoner. He's not supposed to take his hood off. He's definitely not supposed to humanize Jody. Unfortunately, Fergus is at heart, a decent guy. He can't resist treating Jody humanely.

Over the next four days, Fergus and Jody get to know each other. Jody tells his captor about his girl back home, Dil. He even shows Fergus a picture in his wallet. He bemoans the fact that he might never see her again, and asks Fergus to look after her, should the worst befall him.

Of course, the order eventually comes down that Jody has to die. Fergus is slated for the task, but can't bring himself to do it, buying Jody a chance for escape...which gets him about as far as the nearest road where he's quickly run over by an APC. The British army has found the IRA hiding spot, it seems. Distraught, Fergus runs for it, fleeing both the British soldiers and his former comrades in arms.

Having no other course of action, Fergus makes his way to London to honor Jody's last request. He reinvents himself as Jimmy and finds Dil working as a hairdresser and sometime lounge singer. Though he means to tell her the truth about himself, he finds himself falling for her first. But, he's not the only one with a secret.