Film / Dancer in the Dark 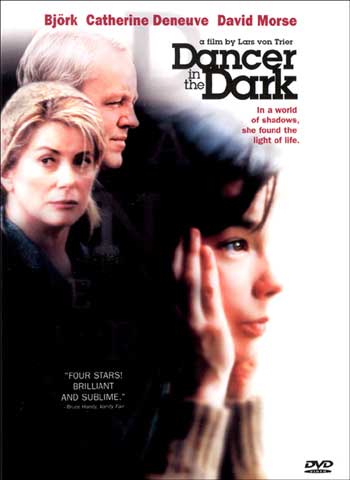 Dancer in the Dark is a 2000 musical drama directed by Lars von Trier, and starring, of all people, Icelandic singing sensation Björk.

Björk plays Selma Ježková, a Czech immigrant to the U.S. State of Washington in The '60s. She lives with her son, Gene Ježek (Vladica Kostic) in a trailer home owned by town policeman Bill Houston (David Morse) and his wife Linda Houston (Cara Seymour), and works at a factory. Selma loves Hollywood musicals, and sees them at the cinema with her friend, Kathy (Catherine Deneuve). She is auditioning for the part of Maria in an adaptation (because there is no such word as "adaption") of The Sound of Music, and throughout the film, she slips into daydreams in which she imagines herself and others around her spontaneously enacting musical numbers. Co-worker Jeff (Peter Stormare) pursues her romantically, to no avail.

Unbeknownst to everyone, Selma is gradually going blind from a hereditary disease, and Gene will eventually suffer the same fate unless she secures an operation for him, hence she has moved to the US. All the money she has been making at the factory is saved as a fund for the operation. When Bill steals said fund so as to hide the fact that he is broke from his wife one day, things do not end well...

Did we mention it's a musical?

Troper in the dark: